I don’t know why, but the Universe is apparently trying to kill all of my dreams and fantasies.

It may or may not have started when CBS began airing the Victoria’s Secret Angels Fashion Show immediately following the Rankin/Bass claymation holiday favorite, “Rudolph the Red-Nosed Reindeer,” with the song stylings of Burl Ives. I remember being absolutely dumbstruck by the juxtaposition of the shows. It seemed a treacherous pairing, at best. “Mommy, why are the angels only wearing shiny underwear?” It might have happened then, I’m not sure, but I started to realize some things about my beloved Rudolph claymation Christmas special. Some ugly things. 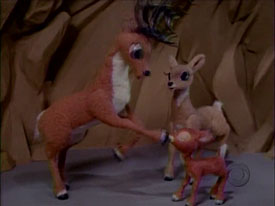 Rudolph’s father is an ass.
Donner may be Santa’s lead reindeer, but as is so often the case with honored and outstanding athletes, he’s also a jerk. As soon as his adorable new son’s nose starts glowing (which is approximately five minutes after he’s born), Donner pitches a fit and rejects the kid. He looks for ways to make him more normal, including scraping up some reindeer house dirt and making Rudolph wear it on his nose. Does he ever wonder from where Rudolph inherited this glow? No. Does he ever self-reflect? No. Does he show his son loving kindness and acceptance? Nope.

Fast-forward to a claymation sequel: “Rudolph Goes to Therapy.” 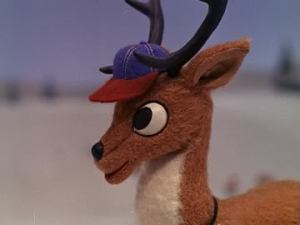 You're not that cool, pal. And your hat looks stupid.

I Hate Comet.
The name says it all, really – the guy can fly, so it makes sense that he’s in charge of teaching the little reindeer how to take off and land. Apparently, he’s also in charge of telling the kids who to shun. When Rudolph’s new friend, Fireball, accidentally outs him as a beak-blinker, Comet goes bugnuts and tells all the other reindeer not to play with Rudolph anymore. Dude. He’s your buddy’s son. His dad and you go flying around the world together every year, hauling a fat guy and a planet’s worth of gifts on a deadline. You’ve been through so much together – sideways snow, sideways ice, wind shear, tricky landings, dodgy takeoffs, near-misses with planes, that year Blitzen hit the sauce and you had to pick up the slack… Donner’s always got your back. This is how you show that brotherhood? 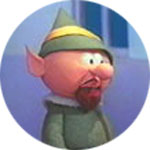 Dude, what is your problem?

The Head Elf is, like, Elfie Dearest.
First of all, why is an elf allowed to be this miserable? He’s so angry! He’s glowering and mean and he yells at the other elves all the time! He’s a terrible conductor and he thinks the elf choir sucks, when they actually sounded perfectly lovely and charming when they sang for Santa (who didn’t like the song, either, the old coot). And then he’s totally cruel to Hermey just because he doesn’t like to make toys.

Tell us why you really hate Hermey, claymation people. Hmmm?

Santa is a d-bag. Santa.
This might have been the most disturbing realization. Santa comes into the Donner cave all “Ho! ho! holy crap what’s up with thiskid?!” He flat-out tells Donner there’s no way the little guy’s going to ever be on his Christmas Eve Dream Team if his schnoz shines like that. He just waltzes in, sees the kid, laughs at him, declares that Donner’s newborn son is defective, and leaves. 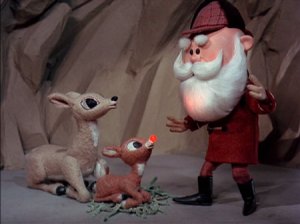 I am so. Disappointed. In you.

So then Hermey and Rudolph run away and Donner and Mrs. Donner are upset but apparently nobody gives a flying fruitcake about Hermey… and they go deal with a scary snow monster and a half-crazy prospector and stumble upon an island full of toys that are messed up except for the doll. There is nothing wrong with that doll. It’s bothered me for years – what’s the problem with Dolly? She seems perfectly fine. So I looked it up, and apparently the Rankin/Bass people claim that her problem is psychological. 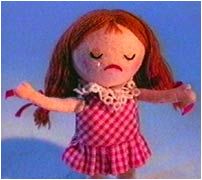 So, what, she just has self-esteem issues?

Are you freaking kidding me?

Initially, Dolly’s part in the show was super-small. They wrote her part larger in two subsequent versions and it’s my personal belief that they forgot to give her a misfit problem and now they want to claim she’s got unexplained mental problems.

Have I had the wrong idea of the North Pole all this time? I have it in my head as some happy place where no one ever cries and nothing bad ever happens except maybe a snowstorm that leaves peppermint-flavored piles of softness that are actually quite tolerable in temperature, and nobody’s a sexist who just blames a sad doll’s problems on some sort of mild female hysteria.

Apparently I equate the North Pole with heaven.

Interesting. I did not realize that until just now. 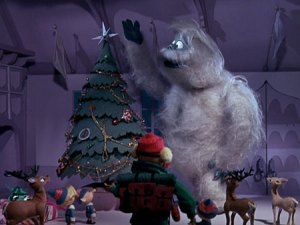 Of course all’s well that ends well in Christmas Town, North Pole, because Hermey the Gay Dentist Elf fixes the Abominable’s hurty teeth and Yukon survives a terrifying cliff dive and Rudolph guides Santa’s sleigh through the worst snowstorm in centuries so all the children of the world can be happy on Christmas morning (because Santa was going to be a big quitter until it dawned on him that the little reindeer he punked could save his cranky hide). Sure, everything gets resolved in Christmas Town. It’s just me who’s left with unresolved angst.

The stuff you read on this site is mine. My ideas, my thoughts, my writing. Unless it sucks. Then you can claim it. You know what, though? I'd rather you just not take any of it. Copyright 2011 - 2016 thesinglecell All rights reserved. Reblog/excerpt/post elsewhere with permission.
Loading Comments...